In 1956, severe frost killed off almost all the olive trees in the region, and people turned to viticulture. Valerie Chaume-Arnaud always wanted to be a winegrower.

Her mother tried to dissuade her, hoping her daughter would find a more ‘modern’ occupation, but the strong willed Valerie followed her heart.

After studying oenology and viticulture, she took over the 5 hectares of vines belonging to her parents in 1987.

With her husband Philippe, they bit by bit extended the vineyards, which today cover 38 hectares.


Vinsobres was included in the Côtes du Rhône Villages appellation in 1957 and became a cru wine in 2006.

This 1400 hectare appellation stretches over 7 kilometres of slopes in the Drome department, in the foothills of the Alps.

It’s protected from the Mistral wind and Alpine influence by the surrounding hills, and a Mediterranean climate prevails. The Chaume-Arnaud vineyard is located on calcareous-clayey, stony slopes at 400m altitude.


Valerie & Philippe choose to preserve the purity of the fruit and the freshness that comes from this high altitude terroir, which is why none of their wines are barrel aged.

They have been organically farming their vines since 2003 and moved towards a biodynamic approach in 2004.

Domaine Chaume Arnaud wines are a model of subtlety and elegance: the reds are rounded, velvety, complex and fruity, the whites are fresh and extremely aromatically rich. 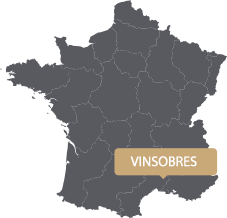